This year has been a pretty good rescue year, just with the earlier PERQ rescue. Having just one like that in a year, would mean you could chalk it up as a good year.

So, having something else impressive happen would be epic...

The birth of the next  epic rescue began when I was asked by a fellow Atlanta Historical Computing Society (AHCS) member, Kyle, if I would like to come help him with some repair work on a Sun 1/100.  He has been helping out a local collector who has, well a  massive collection of vintage equipment... at least that's what I'd say is the best way to describe it.


To give you some perspective, to get to the area where the Sun 1 is (in a climate controlled building) you have to walk around two Cray 1's.    And within visual sight is an Apple 1...  so it's a fun place to visit. :-) 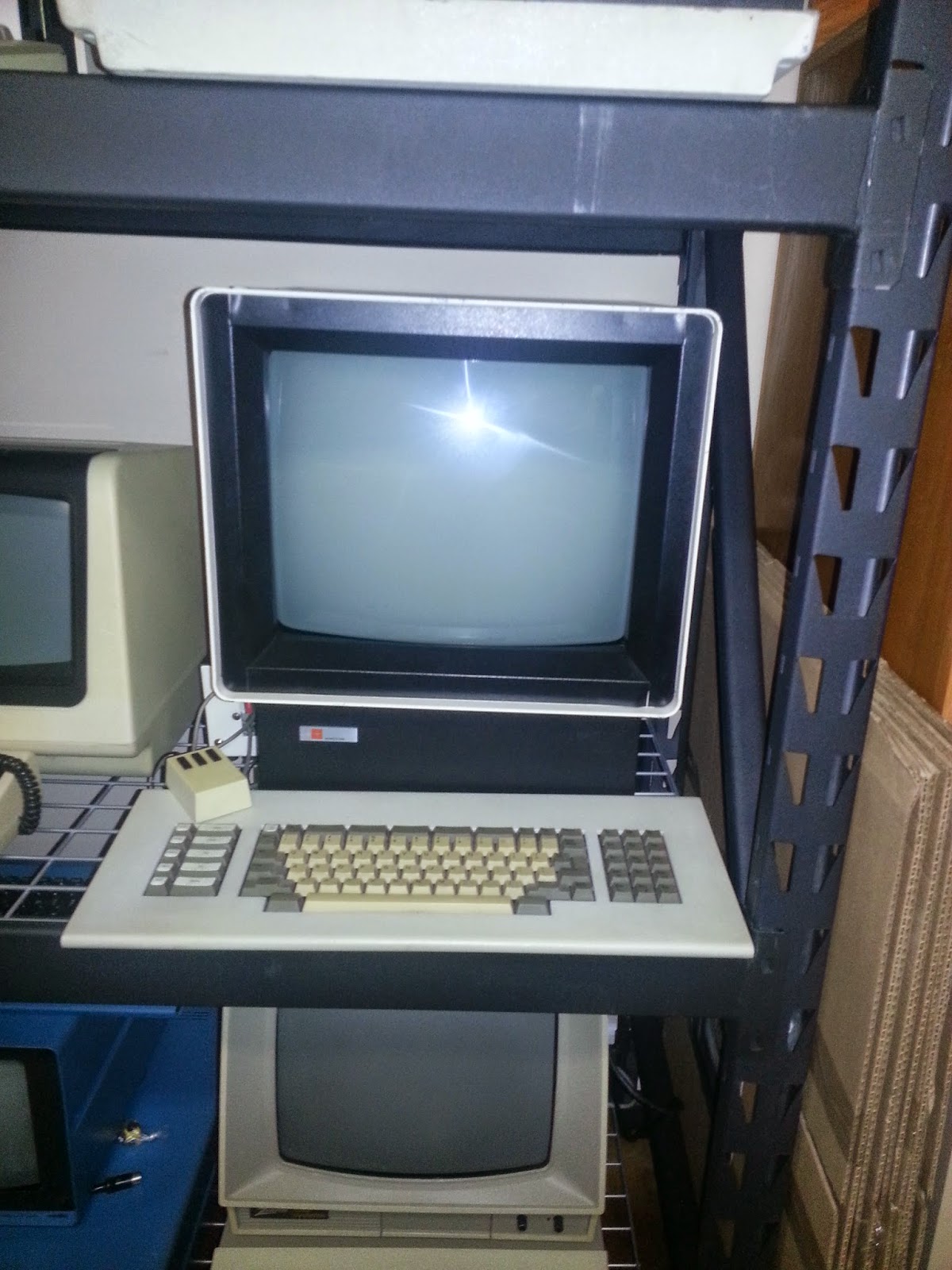 The issue Kyle was working on was how to know if the unit was in good enough condition to get booting.  Since I'm the AHCS member with the oldest Sun knowledge, he thought of me.  So I brought over the oldest Sun Field Engineering Handbook references I had, and a collection of other old Sun docs that I have.

(As an aside, I had kept a file of Sun 1 info, including some contact info for collectors that had Sun 1's at some time... I hadn't really chased much of the info down.  I was saving it for when I had an opportunity to either work on, or if I was very lucky, own one...and this opportunity got me started chasing the info down..)

Kyle had had time to examine the power supplies, and those all looked good. But there was an odd set of boards installed.  Two video cards was the major tip off that something was odd.   I had only seen one Sun 1 in person before, and that was at the Smithsonian.  The mouse matched what I had seen (and what I'd seen in other reference pictures).   Sun didn't actually initially provide a mouse (according to various references I have... it wasn't supported SW wise until Sun OS 1.0)


FYI, the documentation on the mouse (and some old Sun docs in general) is a tad tricky to sort out.   This is because you have to be careful as to "which" Sun documents you're reading.  Is it related to
the "Stanford University Network -- SUN"  university papers, or one of the two initial efforts to commercialize the "SUN" design, (The design was initially documented in the The SUN Workstation paper, and involved some of the same players that created the two companies). The two companies were VLSI Systems Inc., which focused on OEM relationships and Sun Microsystems... the two companies had amost the same founders... which also overlap the individuals from Stanford. It seems the Master's project initially spawned VLSI Systems Inc  which then somehow became Sun Microsystems.

The back panel Mouse connector provides a hardware interface compatible with currently used mouse devices. Software support will not be provided for this interface until the release of the forthcoming Sun mouse product. If you need to use this interface before then, contact Sun for assistance.

This agrees with most of the additional supporting documentation I've been able to find.  However, Sun DID offer a mouse later (you can find information on it in the unpacking documentation -- 899-1109-01H System Managers Manual for the Sun Workstation Models 100U / 150U Rel 1.1 March 1984 )


4. Lift out the rubber and styrofoam packing material (the fit is fairly tight; try rocking it out). At this point you may find a mouse and mouse pad tucked along the side of the monitor; if you ordered an 84-MByte disk subsystem, these will be packed with it instead.

Additionally, anecdotal information shows that the Hawley Mark II Mouse was one available at the time and common at the time.   This mouse has been seen in pictures of Sun 1 units on display at museums, but to date, I've not found any definitive documentation from Sun indicating it was anyway officially connected to them.

Keyboard wise, the situation is even murkier. The Sun docs provide conflicting information on how many different types of keyboards were available for the Sun 1.   In the SUN-1 System Reference Manual" (from July 27, 1982, and listed as (c) Sun Microsystems Inc.) it lists two keyboard options : 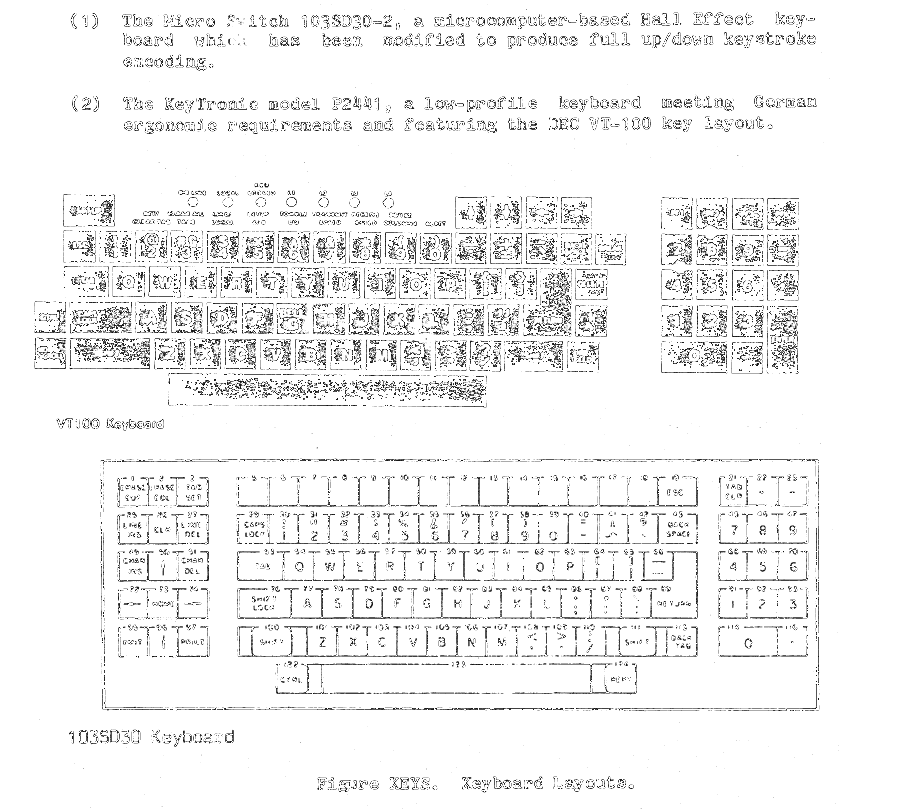 However, in the later editions there is no reference to a second type of keyboard.  There is reference to a "Klunker Keyboard" in some early Sun Field Engineering Handbooks.

So, at present, it's not clear whether or not there was one or two options here. However in my current research, I've yet to find any evidence of any but the keytronic models.   For the Micro Switch to have been an option, it would have to been a parallel model.  The earliest Micro Switch keyboards I've found for any Sun have been serial (as the one in the above picture...).


The keyboard types after the Type 1 are better documented.

Lastly, as I mentioned before, when we opened up the machine, we found that it had two video cards. And that didn't make much sense.   Later model Sun's did support multiple video cards, but since the Sun 1/100 was an all-in-one, it seems that this wouldn't be a standard configuration.

So, after our first couple of days working on the box, we had realized a few things:  1) That it's not the correct keyboard, and 2) that the previous owner had put in an odd set of boards.


At this point, I decided it was time to start researching in earnest, including reaching out to the contacts that I had stashed away... it was time to see what information I could pull together.

To be continued....
Posted by EarlTheSquirrel at 6:57 PM