The first rescue for 2014 was a pretty spectacular one.

During the prep for VCF SE 2.0 (which is local for me), we got a contact from Andrew who was local and had a PERQ computer that he was considering displaying and potentially offering for sale.   I posted back and encouraged him to display, since I was interested in seeing one first hand.

See, I am familiar with the name, and to some degree the machine... I didn't earn the nickname "cesspool of useless information" for nothing :-) .  However, most of my information wasn't first hand but rather came from some passionate postings (perhaps you could even call them "musings") discussing them.

These postings I had read on one of the computer rescue lists that exist. (it's a great one and discusses rescuing just about everything. It started with a focus on Sun Microsystems Computers : rescue@sunhelp.org) )  It's one of many communities that exist where you can find that you're not alone in rescuing computers.   Like any other community, it can be a surprisingly encouraging place to many folks who feel disconnected and alone.   I believe people are built to look for places to experience life together with others, and this is definitely one where that happens.

The  VCF SE show planning continued and ultimately the PERQ didn't get displayed, but the owner did join the Atlanta Historical Computing Society (AHCS) mailing list.

A month or so after the show, he posted saying that he was moving.  His wife had given him a year to do "something" with the PERQ, and since it had sat largely idle, it was time to try to find it a good home.  He asked that folks contact him after 10 am the next day.    So at 10:00:01, I gave him a call.  He had received an email expressing interest, but told me that the suggested time windows for pick up wouldn't work for that fellow.  He needed someone to come over in the middle of the week.  I told him that was something I could do, as long as it didn't need to be "today" and that we could work out a day.

As I was making arrangements to pick up the machine, I knew that ultimately I wouldn't be keeping this machine, even though it is a very rare one.  I simply didn't have the passion that I knew others did for this machine.   So I posted to the rescue mailing list where I had read about them, and asked to be reminded who was (or who were) the appropriate people.

Later that night, I had my reply, and almost caused Skeezics Boondogle (aka Chris) to have a heart attack by telling him that it was his if he wanted it. (The details of his overall reaction will be the topic of a future post here...it's a story in and of itself.)  His initial response started with :


WHERE?
HOW MUCH?
WILL SACRIFICE MY FIRSTBORN, TAKE A 2ND MORTGAGE, EVEN PUBLICLY PROCLAIM UNDYING LOVE FOR WINDOWS VISTA. SERIOUSLY.


And my reply included this :

So, here's the deal, if you want it, it's yours... yes, you read that correctly.

It's a good thing I'm on beta blockers.  I think my heart might have exploded otherwise.  Joy!  Oh frabjous day!
Holy cow... 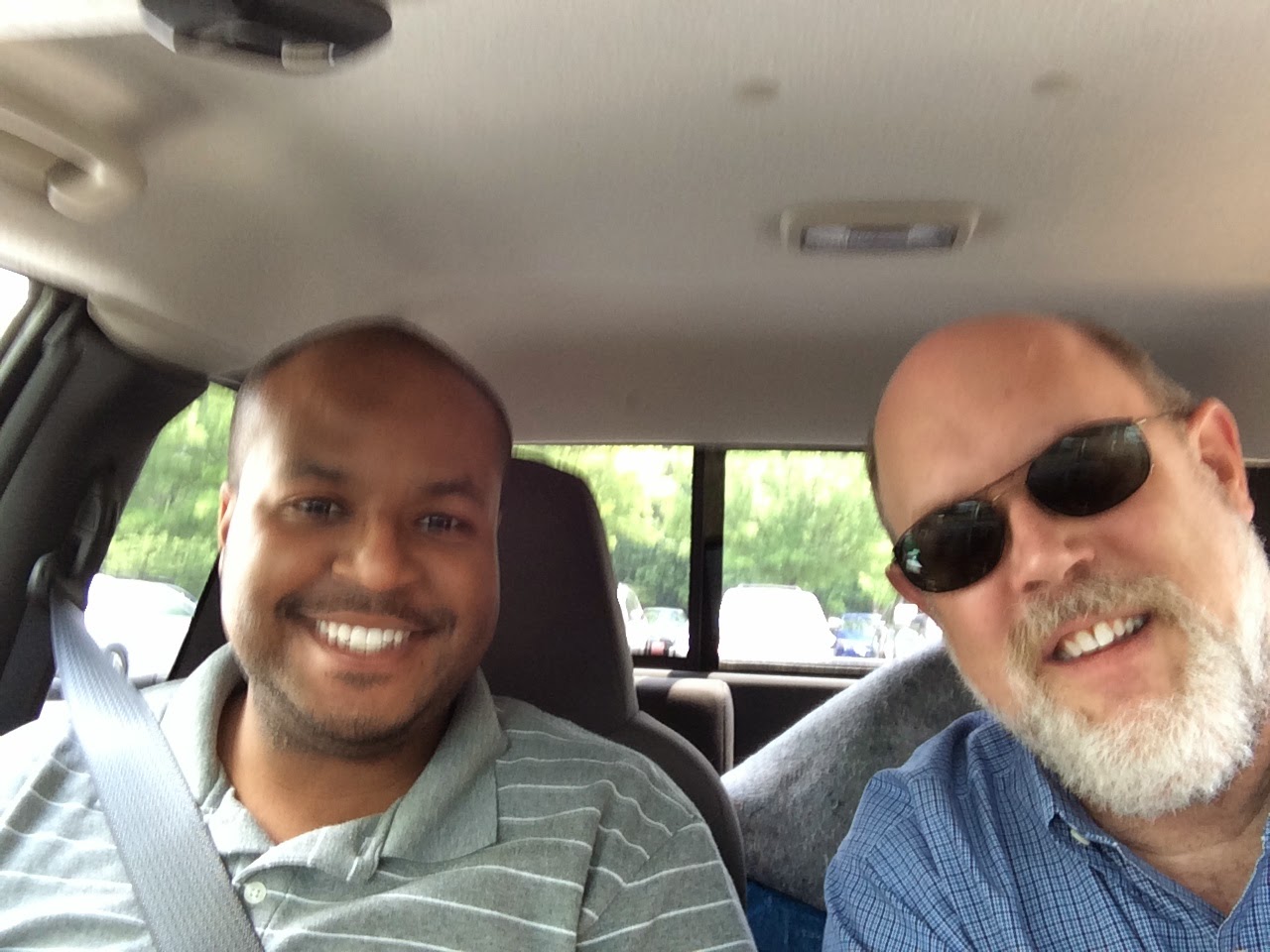 So a few days later, I convinced a co-worker (Jeff) to take a "road trip" with me to rescue the machine.  It was a first for him.  To him the machine is "antique", since it was manufactured before he was born.

We headed off with general direction, address and GPS to direct us in. (the general location was Dallas GA, which "looked" closer than it ultimately was)

As we started out, we grabbed some lunch and saw this license plate, which we took as a good omen.  Almost PERQ.... and notice the Dallas :-)

So as we proceeded we called to try to make sure they'd be there when we arrived.  We learned that we'd have to wait a short time (though, we did get to learn first hand that one of their neighbors had a talented child, and looked like he was turning into a good 3 point shooter :-) )

When they arrived home in a matching pair of Smart Cars, they graciously invited us in and we found the PERQ up a short flight of stairs, ready for us to cart off.   (Though Jeff and I did have the same thought running thru our heads, their front yard was close to a 40% grade.... and we had NO idea how heavy a PERQ actually was... we were thinking... 1980's.... all Steel... going to be a beast...but in actuality it's got a lot of plastic and isn't nearly as heavy as it looks... honestly...)  And this is when we realized that it was at least a PERQ 1 chassis (at least from the pictures we had seen on-line..) 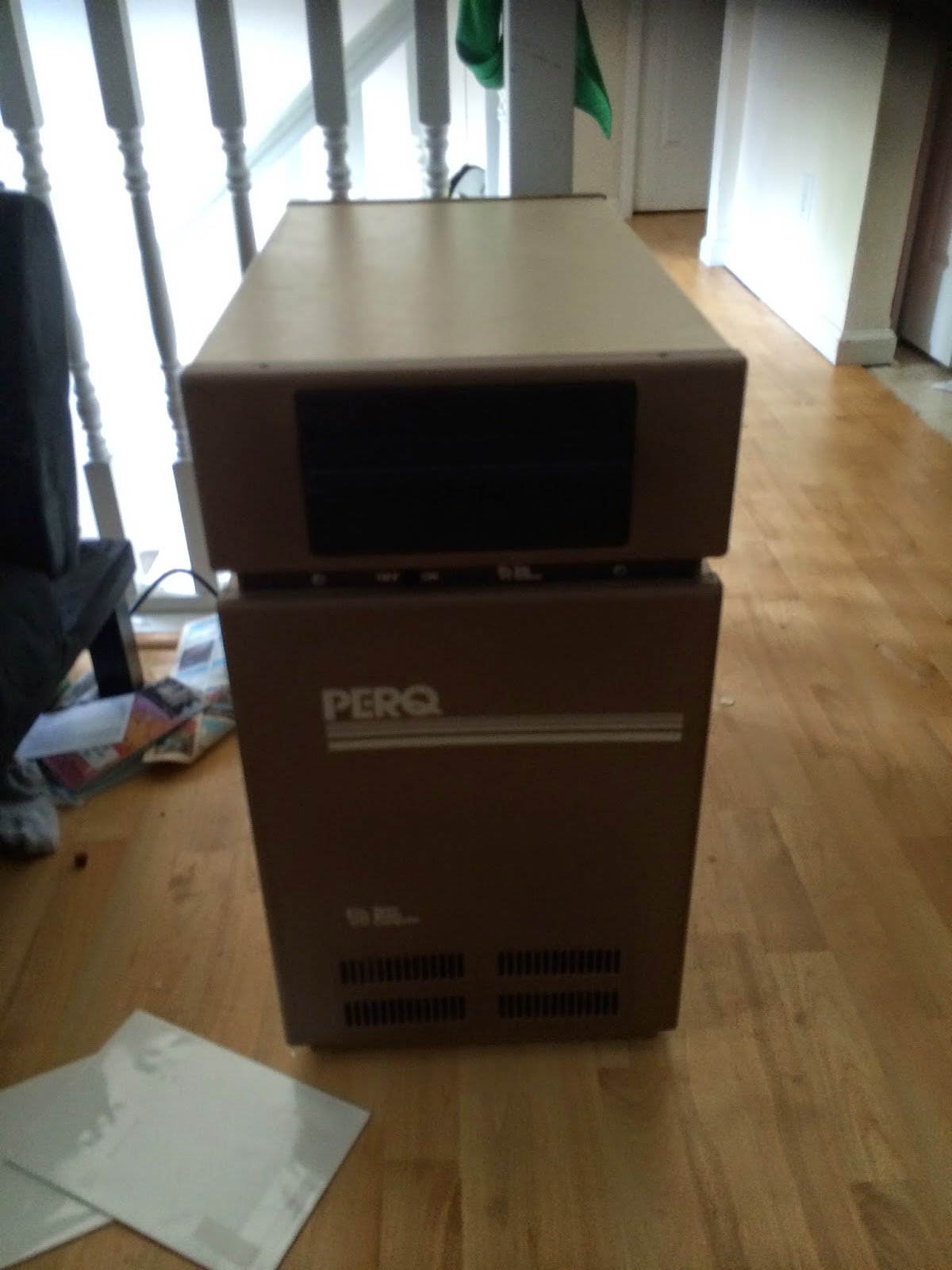 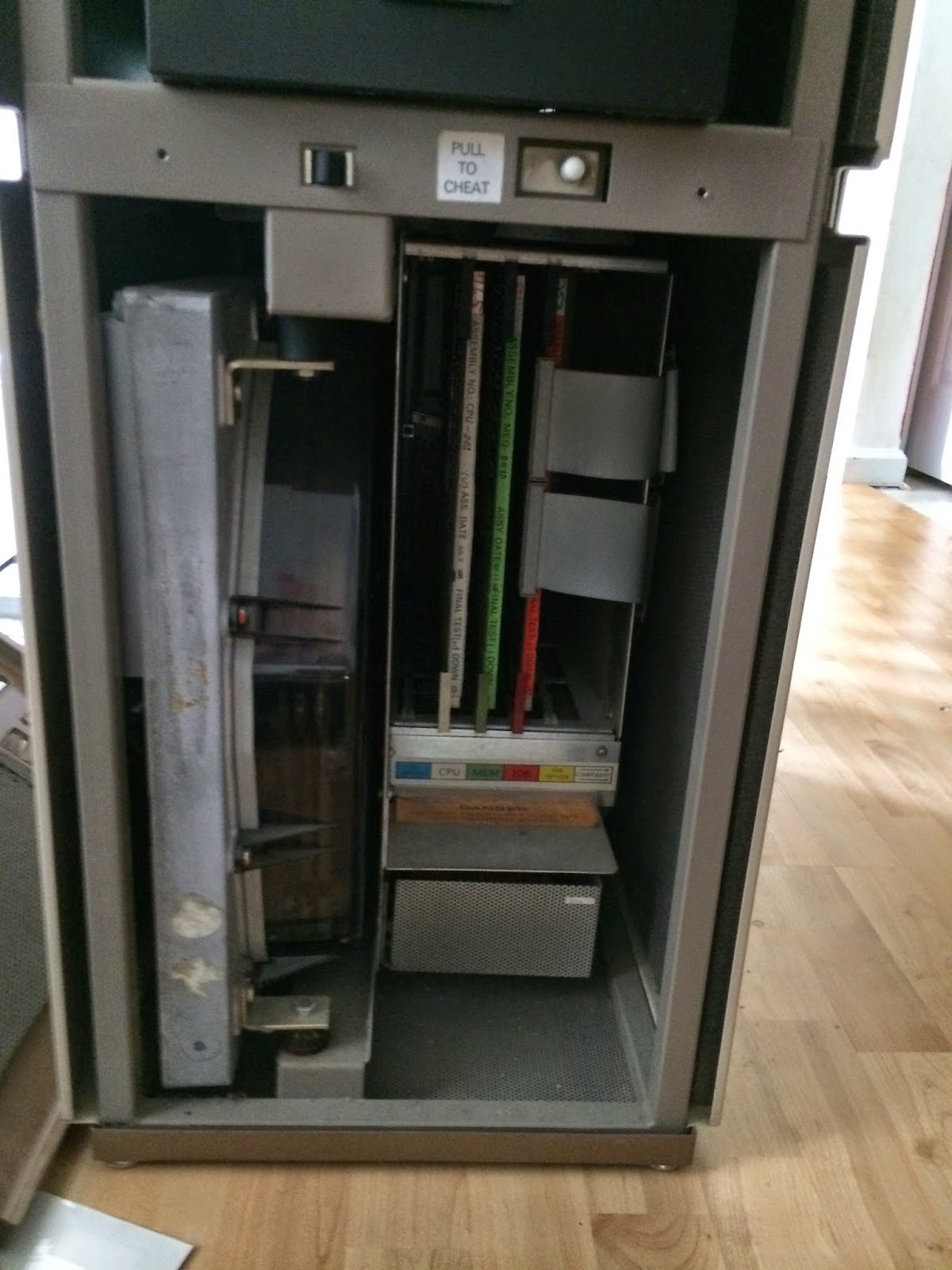 The owner shared the story of how he had purchased this at a garage sale in an area that was very close to where we had started from.  He had actually fit it into one of the Smart Cars, it just barely fit.  He told us the owner had used them in his business, which he believed was an architectural firm.  He also told us that as he understood it, the previous owner either "had" or "did" own a bunch more of them.    That got us even more excited, and we wondered if Skeezics would survive learning that even more of the rare machines might be available.

So, Jeff and I got started and carried the PERQ down the stairs, down the front steps, and finally huffed and puffed it up the front yard / hill and set it down on the tailgate of my truck.    During the trip, at least one piece of a step broke off underneath me... not due to weight, but due to the repairs needed...it was a rental house. A few minutes to wrap it in quilts/blankets, put a tarp over top, bungee it in and we were off.    After retracting our trek (and trying to avoid Atlanta traffic) and we safely made it back home.   There we could appreciate the rescue in much more detail. 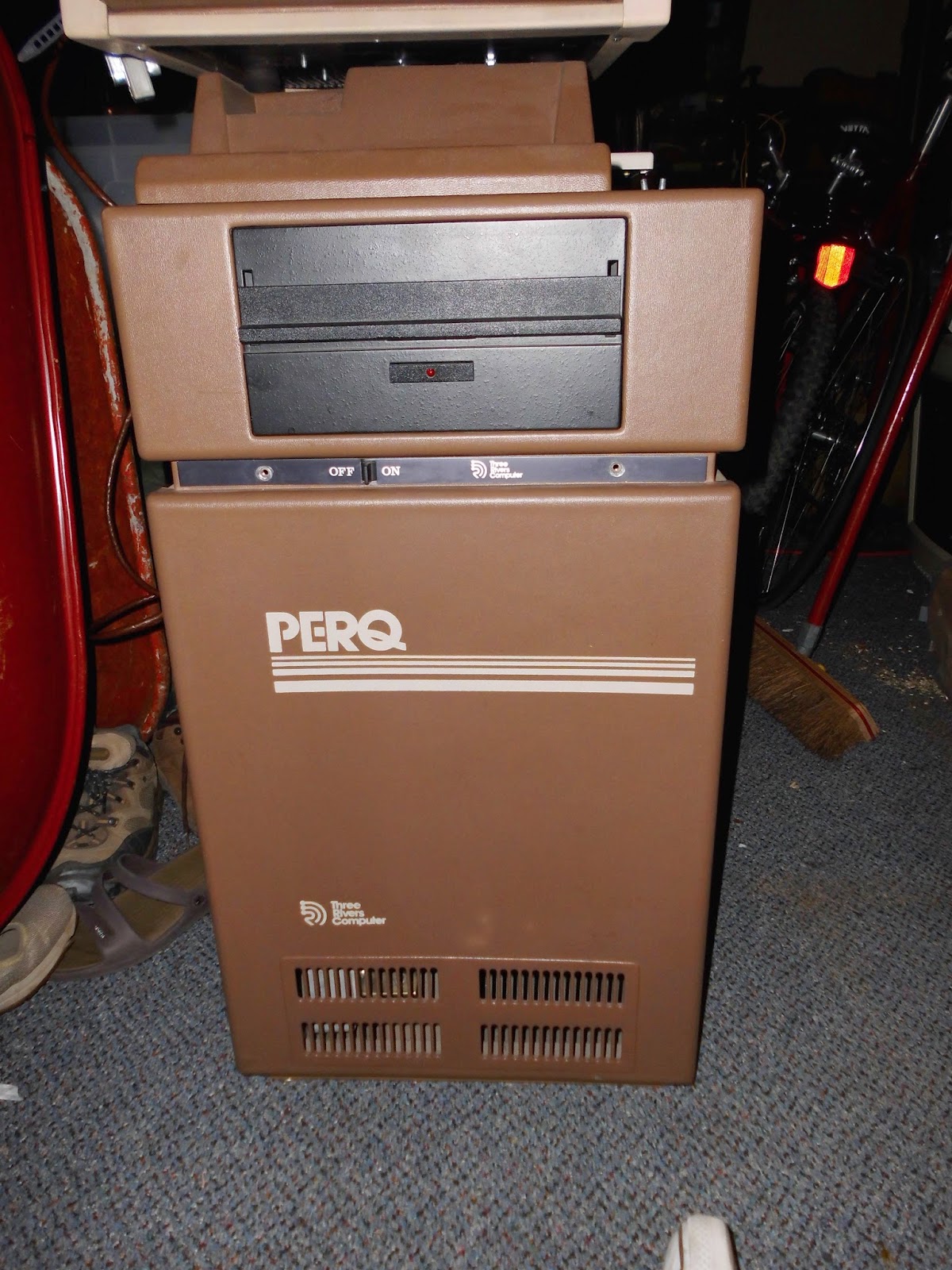 With some better lighting, you can see that the unit is excellent cosmetic condition.  One of the pieces that rarely survives unscathed is the front bottom grill, since the front panel is a single very large piece of plastic.  After removing it, you see that the machine is simply contains 3 boards (in the previous picture).

There are a number of fairly unique aspects of this machine. First, it's CPU is actually not implemented by a single microprocessor, but a "board" of TTL logic.   The three boards in the system are color coded so you don't place them in the wrong slot (a great idea that I've not seen on other bus based systems) White:CPU, Green:Memory, Red:IOB , Yellow:OIO.

Since I knew I was going to take the machine apart for shipping, I called Skeezics and asked him about details of taking it apart.  After simply taking a couple of screws to remove the front panel the boards have simple latches that help disconnect them.

If you look the picture with the cover off above, on the left side is a 14" Shugart hard disk (that's belt driven). The boards are on the right.  Pictures of the individual boards are below. 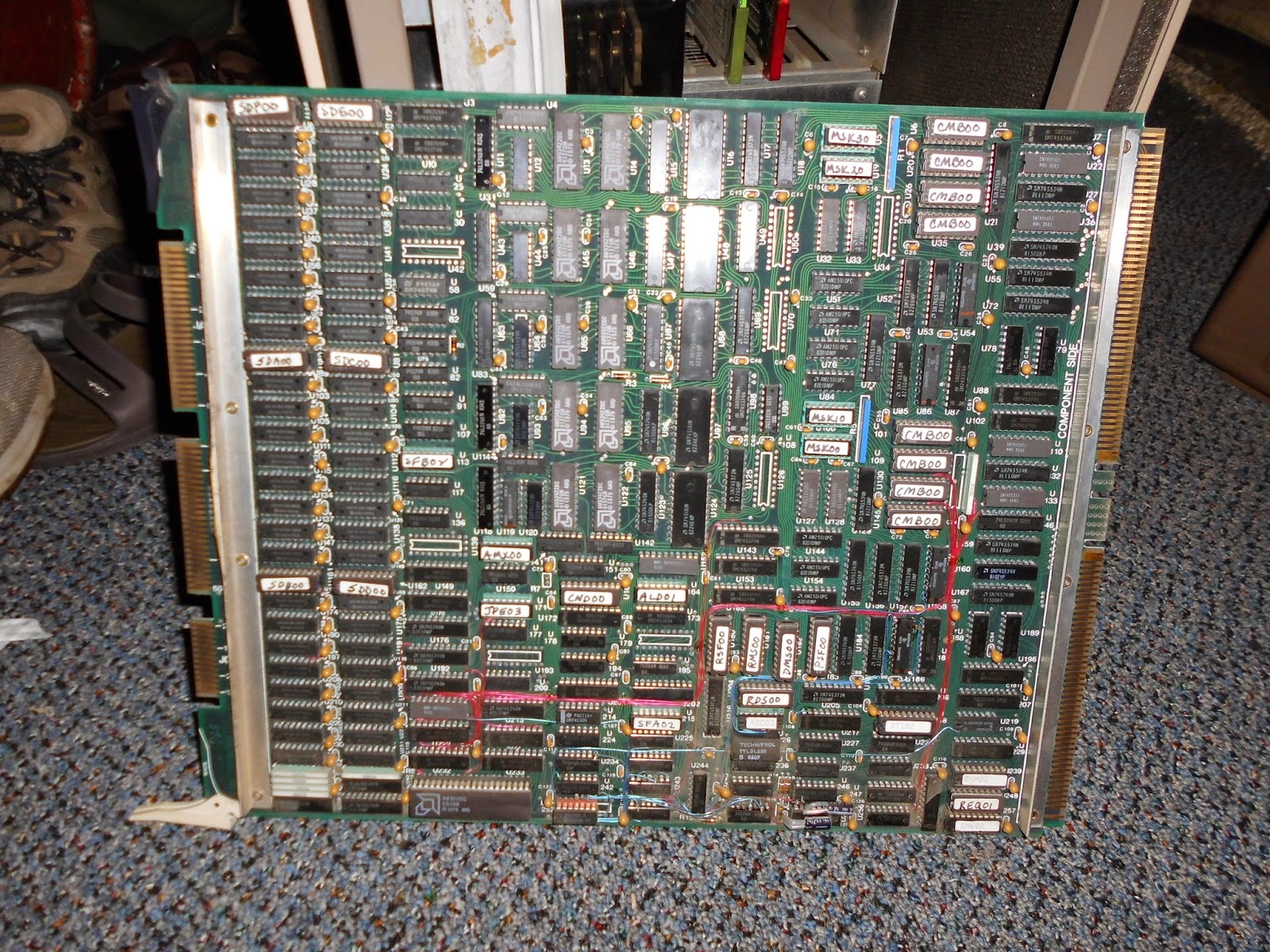 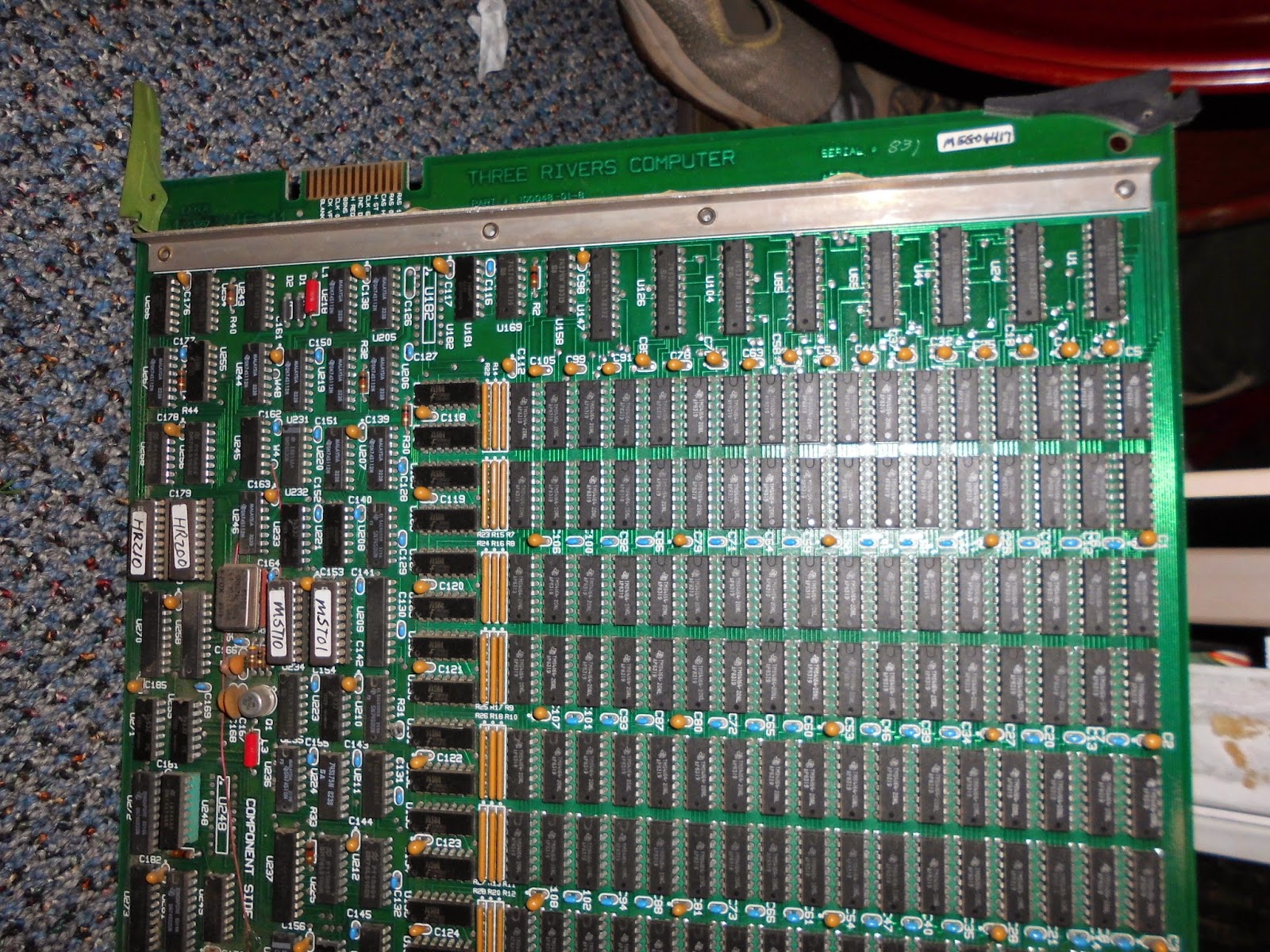 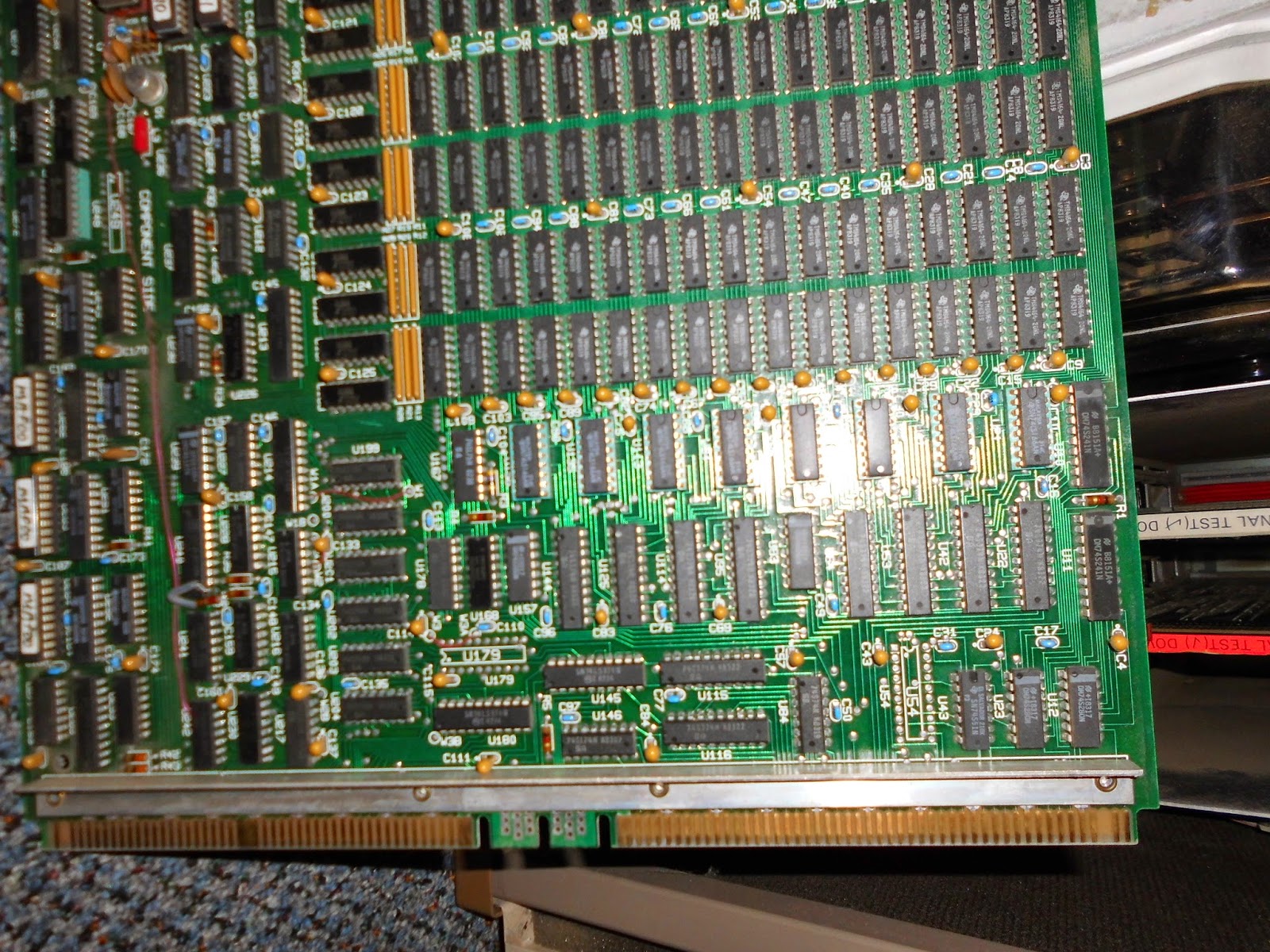 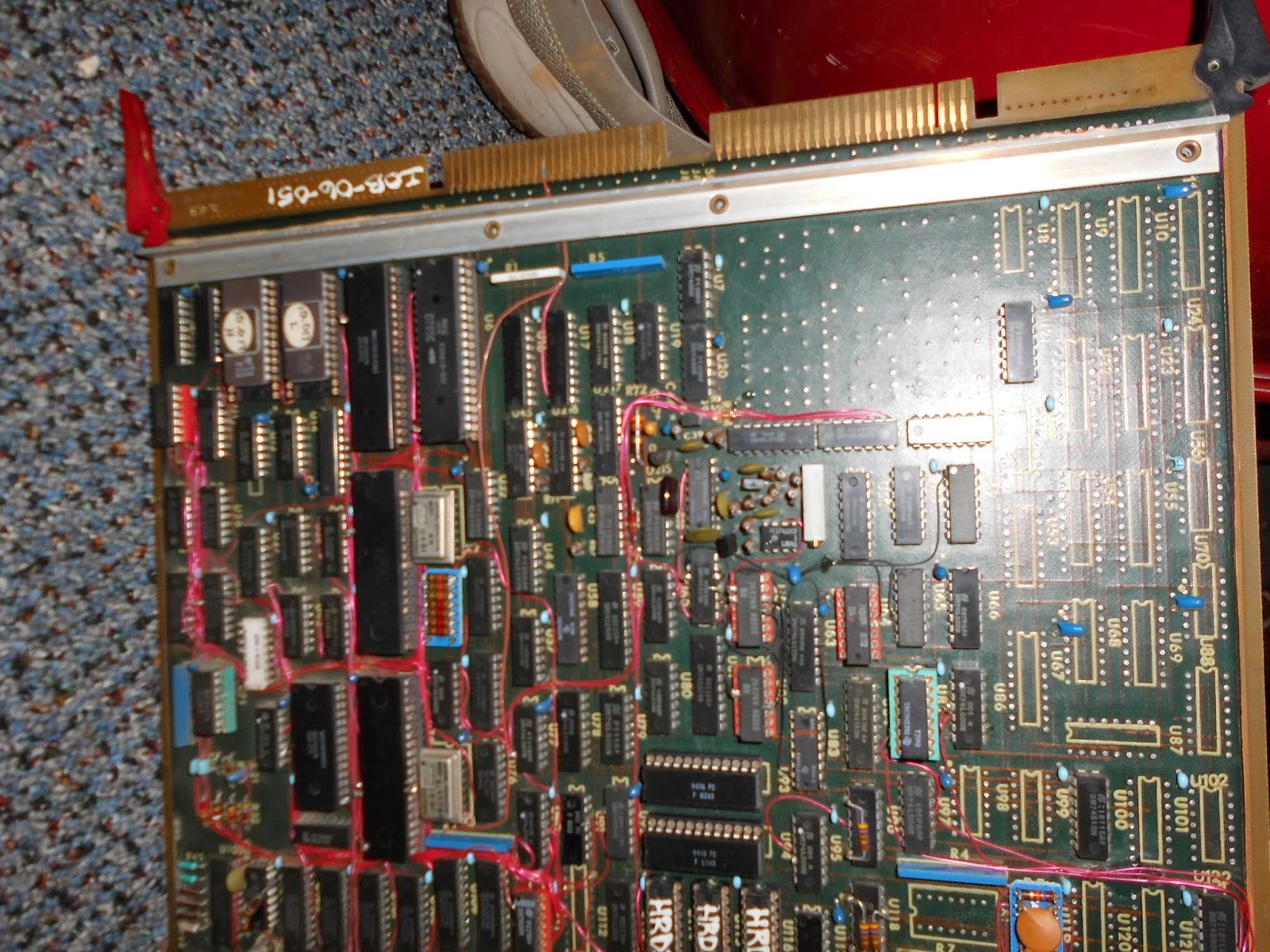 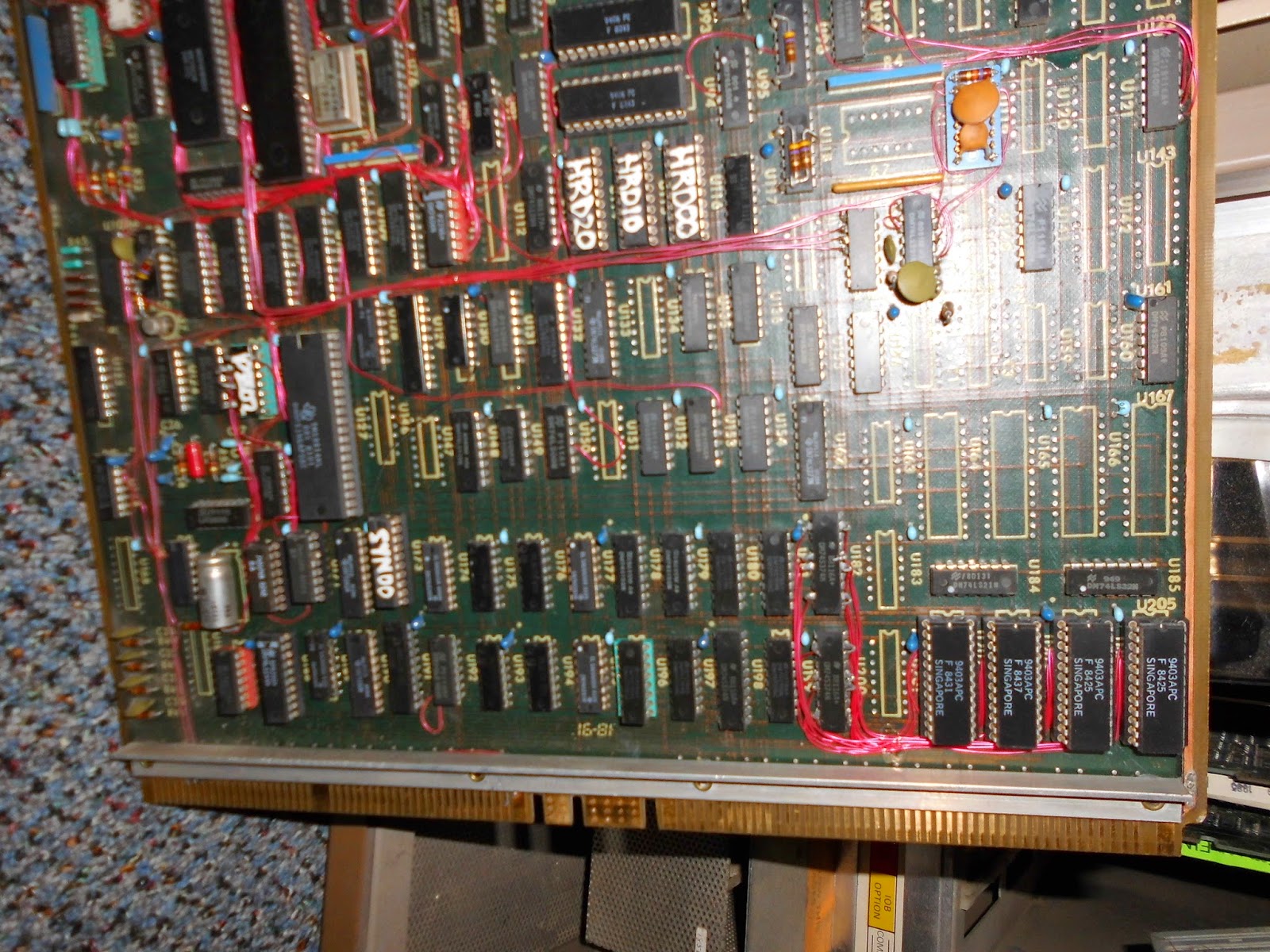 Skeezics was also glad to hear that the rescue also included some software, all on 8" floppies (It's fairly "sizable" amount, at least for a PERQ... the SW is as rare or rarer than the HW) 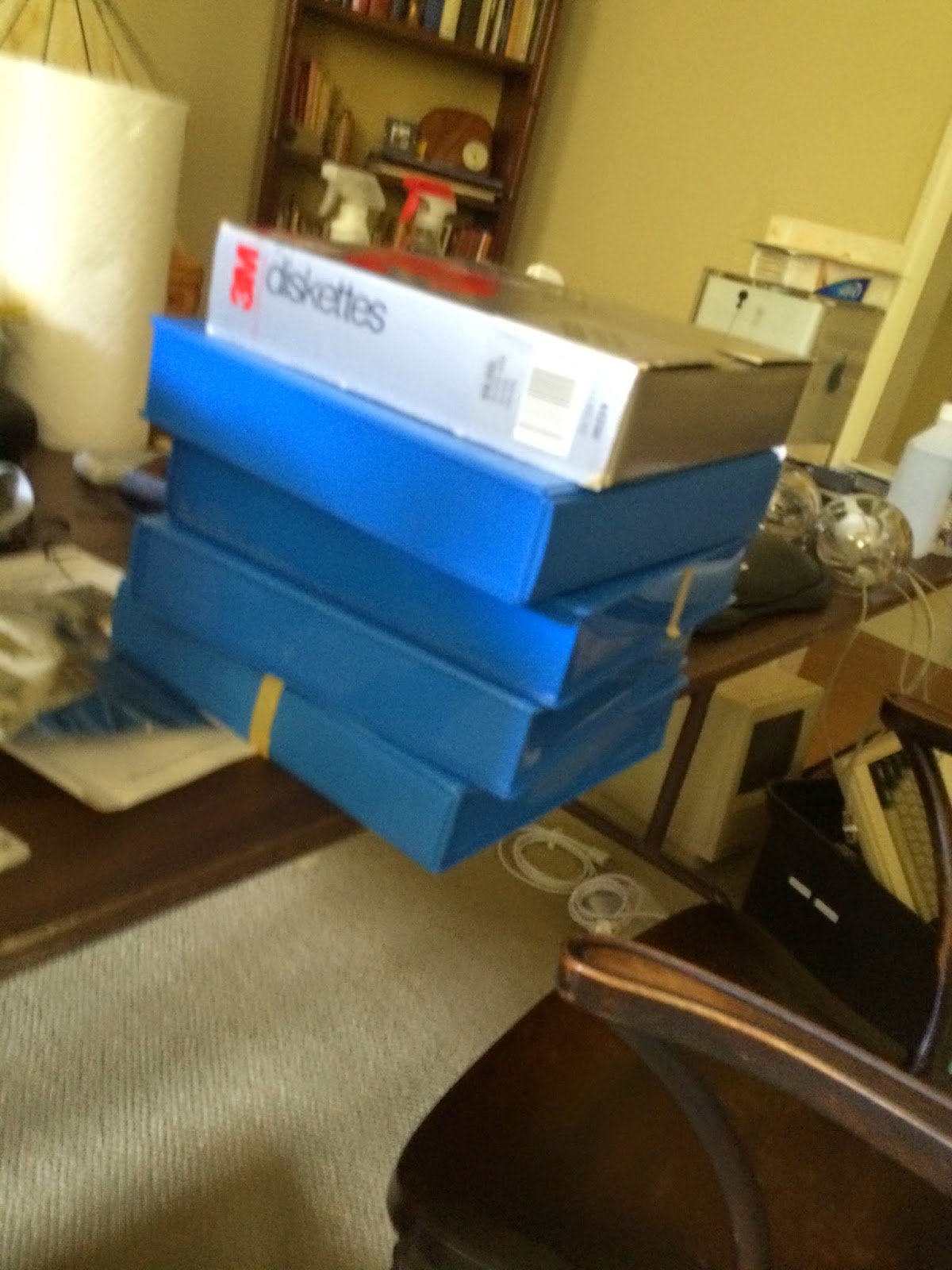 Of course the unit also included the keyboard, and digitizer tablet (no mouse came with the PERQ, it was tablet and puck).   But the rescue didn't include a puck.  The PERQ keyboard has my favorite ACTUAL key, the OOPS key. 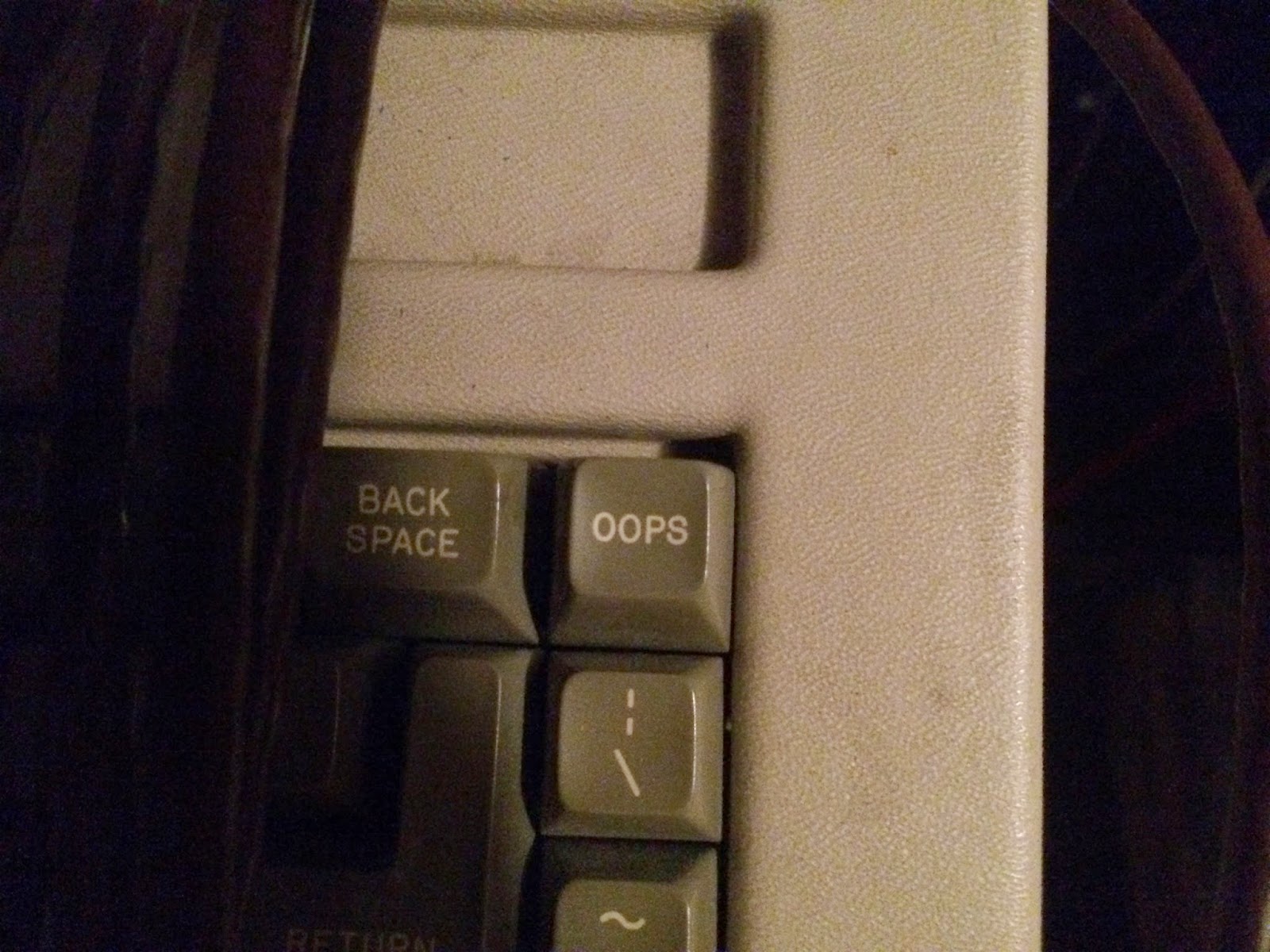 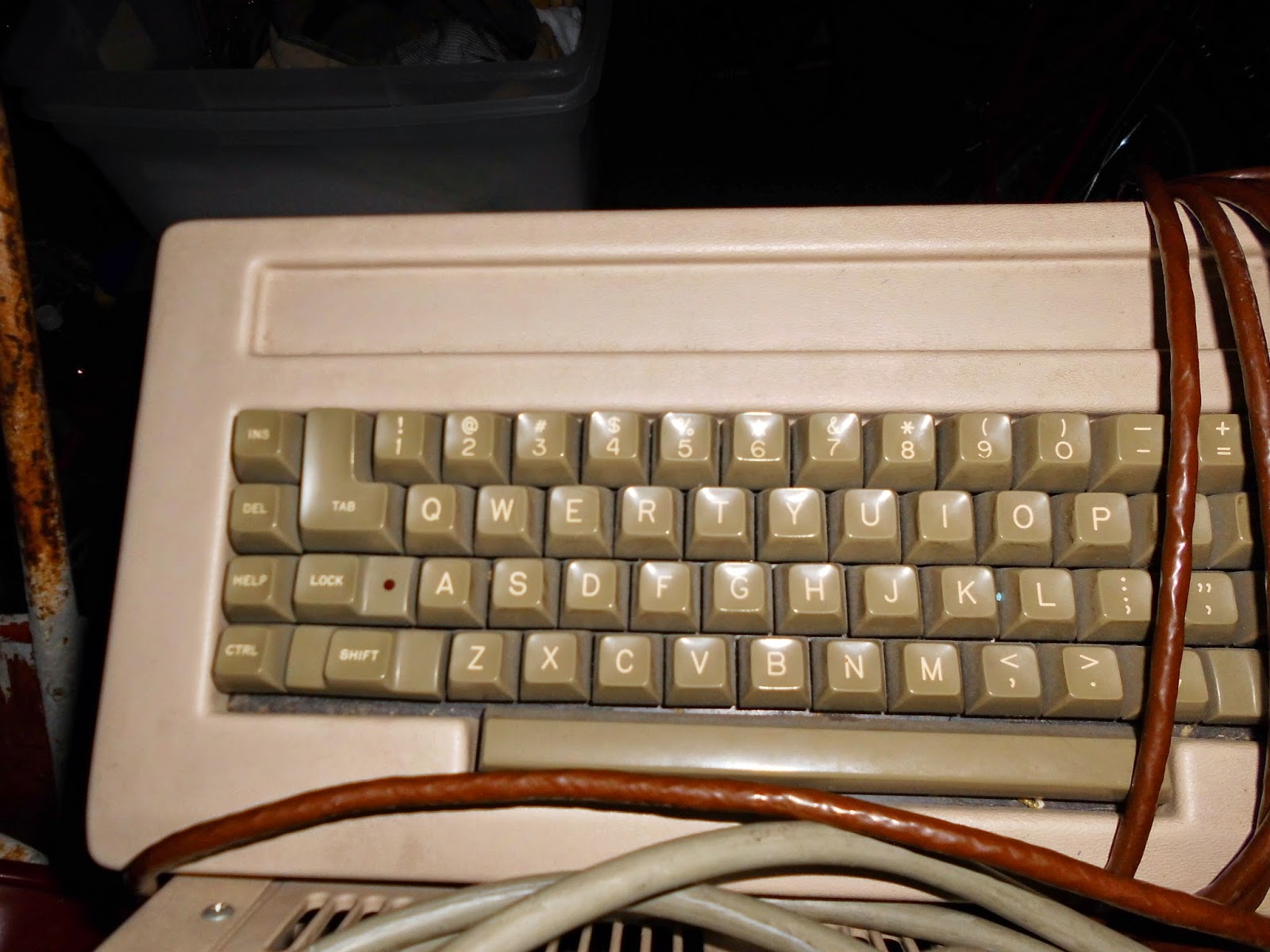 And with all of the PERQs, you got a monitor that matched the video card (it's all memory mapped, and portrait and landscape versions required different boards)   This one had someone at least take it apart, and they didn't quite put it back together correctly.  It shouldn't have a gap big enough for your finger... (all the bezels are plastic... basically if it's dark brown, it's plastic on the PERQ). 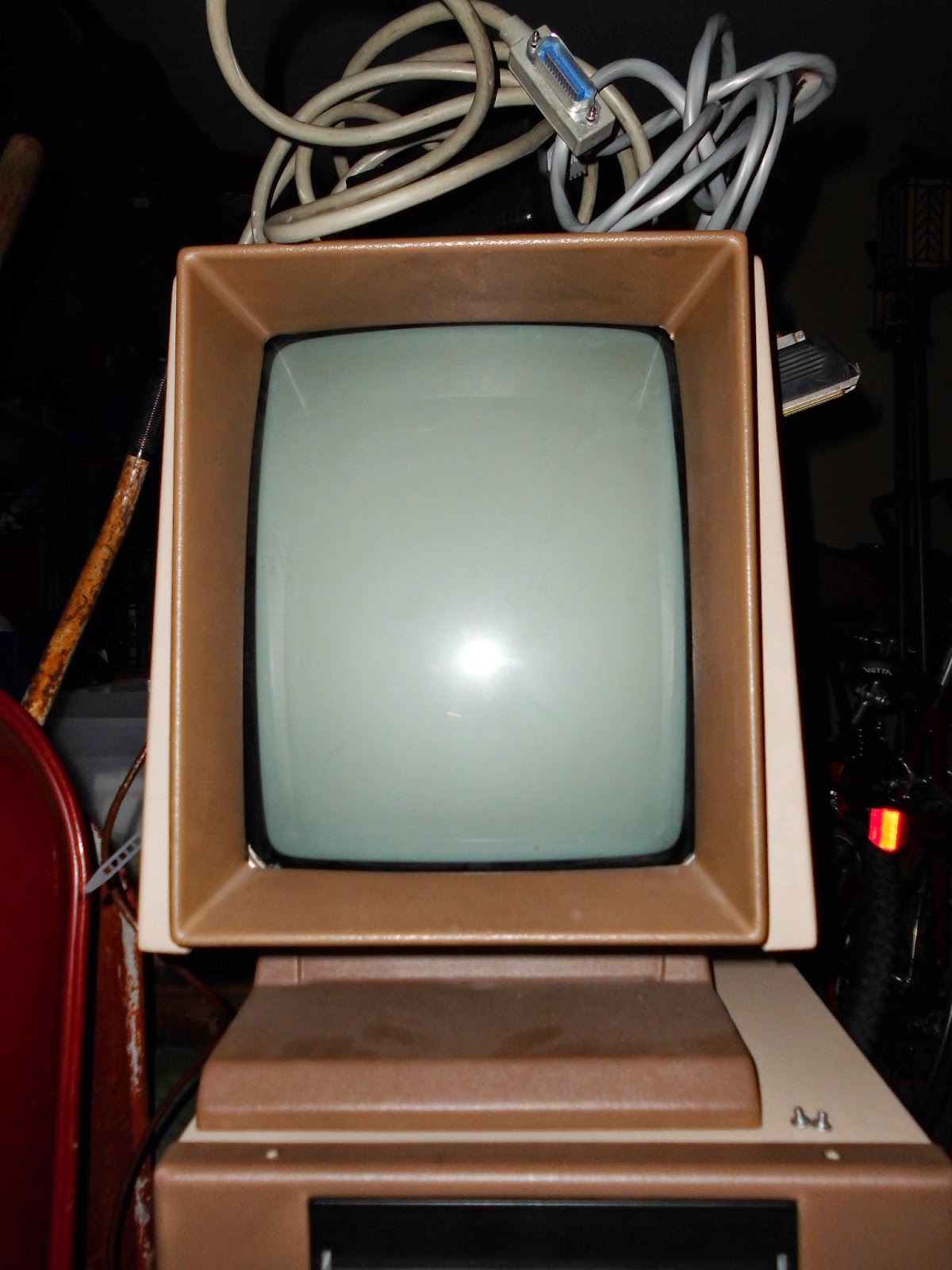 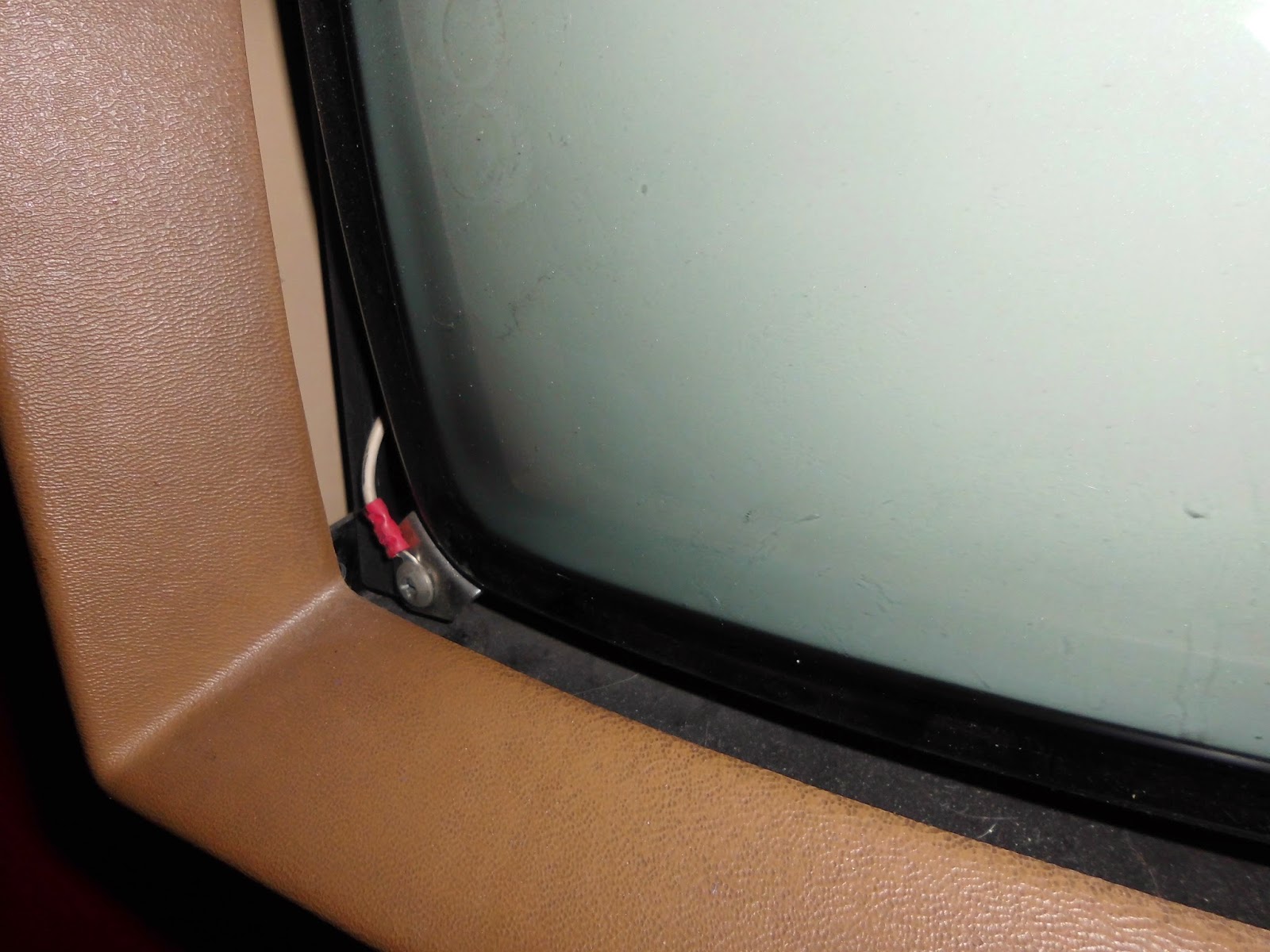 On the side of the monitor, you can see the original PERQ logo, and the original three rivers logo.  For those of you who don't know it, Three Rivers is a reference to the Pittsburgh area (where they were located/founded initially) Behind the monitor in this picture you can see part of the tablet (the light tan square corner). 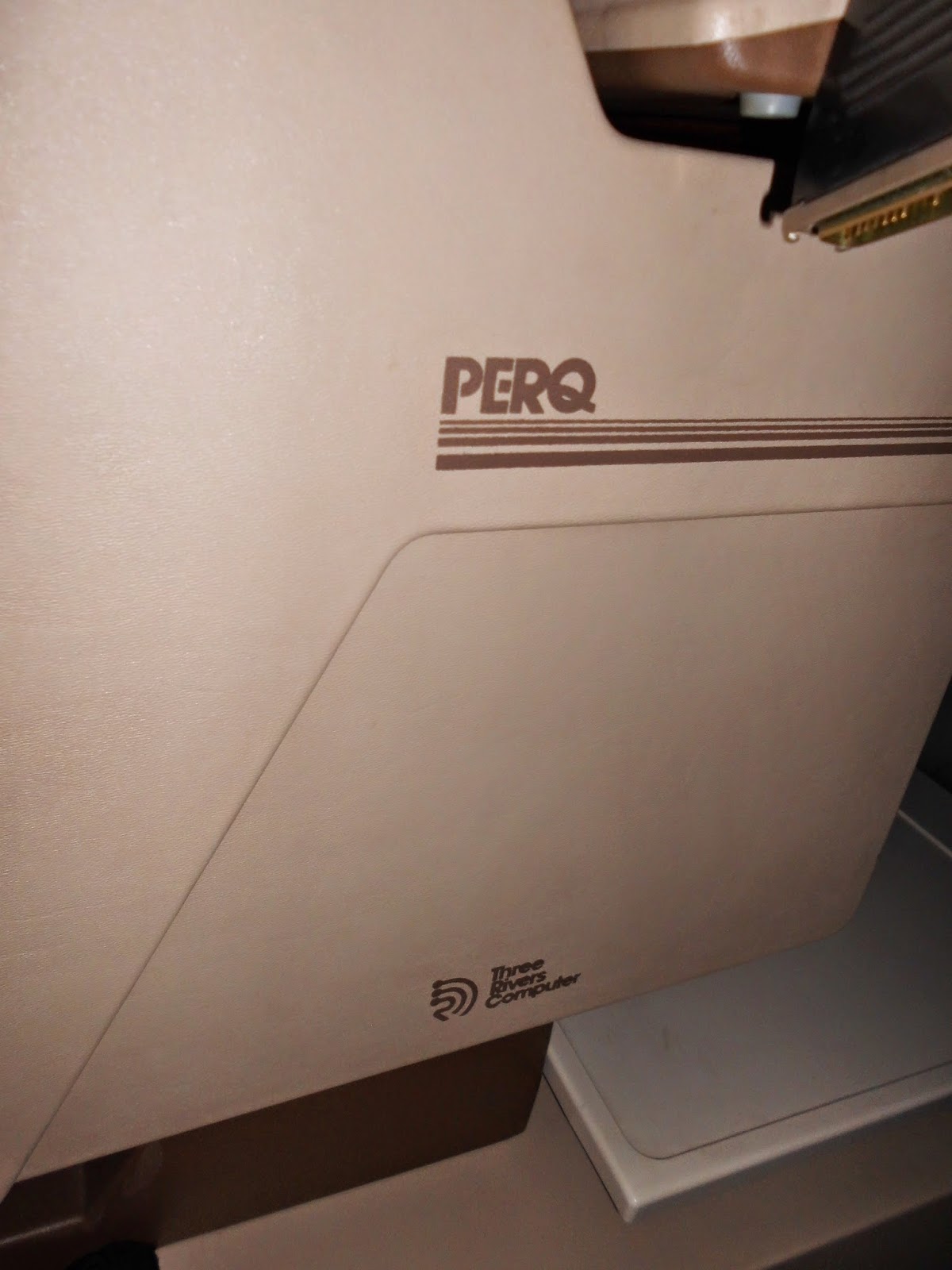 As a footnote, after I got the machine safely home, I was able to get some further information from Andrew about the person he acquired the machine from, who's name is Vic.   Andrew had the company name as well... ASSI (it's not quite where we live, but further north in Calhoun.)  I did some web searching, found out the company still existed, and indeed Vic was the owner and still around.  I gave him a call and explained my situation, and inquired as to whether or not he had any other PERQ HW or SW.  After his expression of disbelief that I had found him and was asking about PERQs (which he did recall fondly),  he told me sadly that the unit I rescued was the last one that they had.  After chatting with him, I looked around the company web site and found this on the history page. This may actually be a picture of the rescued unit from 1985.

Posted by EarlTheSquirrel at 3:50 PM